A few years ago, I watched a television news magazine interview and profile of the famed and accomplished pianist Vladimir Horowitz.  The image on the screen was of Horowitz playing the piano, fingers moving rapidly up and down the keyboard with obvious precision and grace.  The sound of his music was barely audible as the title of the segment became visible on the left-hand side of the screen, and the voice of the television anchor was the dominant sound that was heard.

As the introduction of the profile was completed and the title vanished from the screen, the camera focused on the pianist’s aged, but still nimble, fingers.  The audio volume coming from the piano was increased and the tune became familiar.  It was not the “Flight of the Bumblebee”, “Beethoven’s 5th” or whatever musical piece could best showcase his immense talent, which was not dulled by the years but enhanced by the vast experience the years brought.  It was, however, musical scales; not chopsticks, which defines the talent of many a piano-player-wannabe like me, but a simple, basic, repetitive, and obviously critically important combination of notes designed to enhance a pianist’s skill.  “Critically important?” you might ask.  To which I would reply “Yes!”  Simple, basic, but critically important.

“Let’s get back to basics,” “focus on the fundamentals,” “it’s just blockin’ and tacklin’” – each of these familiar phrases is true.

Our world is replete with other examples of exactly the same principle.  Golf is a good case in point.  Over the years, I have attended a number of golf tournaments, the Masters being the one best known and most enjoyable to experience.  The first time I attended the Masters, I arose early and arrived at the course while the dew was still on the ground and the fog of the early spring day in middle Georgia was just lifting, revealing manicured, vibrant green turf, azure blue ponds, and the wonderful sight and smell of azaleas in full bloom.  I went straight to the practice area where Sam Snead was hitting shots of various lengths from a sand bunker to the practice green.  He hit shot after shot for 30-45 minutes.  By the way, for those who may think that golf started with Tiger Woods, Sam Snead is a golfing icon, reported to be one of the youngest men ever to shoot his age, 58, in tournament play. 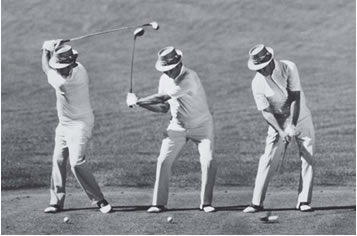 Snead then proceeded to the practice tee where he went through his bag, hitting numerous shots with each club.  What impressed me about this regimen was that he was not doing something exotic, such as hitting with his arms crossed behind his back, with his eyes shut, or using some other trick designed to be a magical method that would catapult him to exponential greatness.  He was practicing the basics.  With Sam, it was obviously, “How do I get better and better at the fundamentals?”

The application to selling is obvious, isn’t it?  Why seek the “new and improved, just off the press, magic potion” some think will overcome years of poor skill development, immediately transforming them to greatness?  Why not follow the lead of skilled craftsmen in all fields of endeavor and become an expert in the fundamentals.  We have often heard, “let’s get back to basics,” “focus on the fundamentals,” “it’s just blockin’ and tacklin”.  Each of these familiar phrases is true.

View all posts by David Greene →